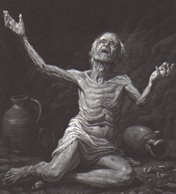 If you do not feel close to God, guess who moved?

Job was the first to break the silence in chapter 3. We have been told about the patience of Job. Yes? No? Faithful, absolutely! But he also poured out his heart. He did not mince words as he spoke to God, as to how he felt. He was very candid in his outpouring of desperation, even to the point of saying, “Though he slay me, I will hope in him; yet I will argue my ways to his face” (Job 13:15, ESV).

There are many other very raw utterances from Job. I offer but a few. Job 23: 1-9: “Then Job answered and said: ‘Today also my complaint is bitter; my hand is heavy on account of my groaning. Oh, that I knew where I might find him, that I might come even to his seat! I would lay my case before him and fill my mouth with arguments. I would know what he would answer me and understand what he would say to me. Would he contend with me in the greatness of his power? No; he would pay attention to me. There an upright man could argue with him, and I would be acquitted forever by my judge. Behold, I go forward, but he is not there, and backward, but I do not perceive him; on the left hand when he is working, I do not behold him; he turns to the right hand, but I do not see him’”. (ESV) Go back and read carefully: “that I might find him” and “he is not there”.  I am reminded of cutesy sayings that are untrue and can do damage to those who are in the midst of trials and suffering. One such saying is, “If you do not feel close to God, guess who moved?” Tell that to Job. Tell that to others, who in their times of agony call out to God and do not sense His presence.

It was sometime after Easter of 2001. I was sitting amongst a group of men whom I loved and trusted. I was recovering pretty well from the prostatectomy. Life felt better than it had in a long time. I made the comment that life was good and that God was good. I was rebuilding relationships with my children. My son and I had enjoyed several motorcycle rides and had grown quite close. My daughters lived near Kansas City. Evan and I had ridden our motorcycles to visit them over Easter. Evan wanted to ride. I was not keen on it, but agreed we would do so. What a great trip. Shortly thereafter, his best friend committed suicide. Then, three weeks later, Evan was killed on his motorcycle: an event recorded in an earlier blog entitled, “The Perfect Day”.

A few weeks after Evan died, I returned to my Sunday morning Bible study group to complete the book of Job.  Thereafter followed additional painful life events, causing me to reflect all the more deeply about Job and his experiences. I could not honestly compare myself to Job. God described Job to Satan as thus: “… there is none like him on the earth, a blameless and upright man, who fears God and turns away from evil”. My slate was not so clean. I learned a great deal from that study that has profoundly impacted me in ways that continue to this day. I will be writing a bit more about the book and, especially, the ending. There is significant irony. Read the entire book. Spend time to ponder. Do not read quickly. Listen to Job, his “friends”, Elihu (who is a puzzle), and to God after He breaks His silence. Next time!