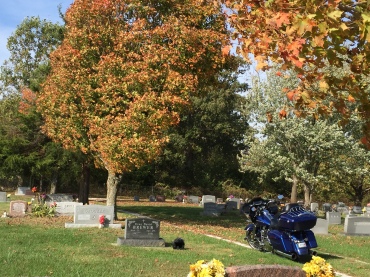 This past Sunday (April 29) marked 17 years since my son, Evan, died. Just typing that causes me to take pause. It seems so long ago and yet so very near. Much of the time surrounding his death has been lost to me. Much that is very dear to me is easily retrievable. I will share a bit about those memories. I will get back to the theme of working with both of my parents. Life has been busy and I have not posted lately.

I remember so very little of the funeral with the exception of a few elements. My memory of the visitation is quite vivid. Yet, I choose to write about my first visit to the cemetery. I stayed away for a couple of days. My family was at my house and I was reluctant to take off on my motorcycle to visit Evan’s grave. My mother hated, and still dislikes that I ride. But, it was something I wanted to do and felt like I needed to do. So, off I rode.

Though my bike had a radio, I rode to the cemetery in silence. It was a solemn time. There was no way to absorb all that had transpired and what I was feeling and thinking at the time. I have no idea how long I spent beside his grave. After a period of time I rode off and toward home. I stopped on a farm road at a crossroad. I happened to see a socket on the road and stopped to retrieve it. A man in a pickup truck, pulling a fishing boat, stopped beside me. He told me he would trade all he had for my motorcycle. I told him I was tempted and why. He stated, as best as I can recall, “My advice: keep riding and enjoy it”. He mentioned something to the effect of “relish the memories of your son and your rides together”. Off I rode to contemplate.

About halfway home, I turned on the radio. Rod Stewart’s “Forever Young” was playing on the radio. Three white doves flew overhead. Talk about chill bumps. I am not one to give much credence to signs or omens. But, that was a chill bump moment.

The next ride, some days later, was a ride to the T-intersection where the lady pulled in front of my son. I pulled up and dismounted my motorcycle. I picked up pieces of his motorcycle that had been left behind. After a few moments, I re-mounted the bike. The song on the radio: “Forever Young” by Rod Stewart. That song is a favorite. It brings deep emotions; one of which is immense pleasure. I still ride. I feel pleasure as I think of Evan. It is particularly pleasant when “Forever Young” plays on the radio. I have seen the three doves only one time since the first time and in the same place. An omen? A sign? A reminder? You decide. Regardless, the doves and the song bring me great satisfaction.