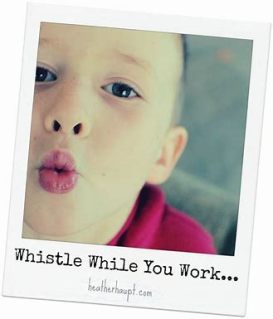 I worked for and with both of my parents. They did not have a business of which I was an employee. They ran the family of which I was a part. So, my working for them was not the result of looking for and making application for a job. Nope. My job was determined as the result of being born into the family. No child labor laws were broken by the jobs I completed. I did not make minimum wages for the work I performed. In later years I was glad to receive an allowance. I do not remember what I received for my first allowance. I am quite sure it did not meet the then prevailing wage. I remember a dime allowance per week and eventually more: a quarter and then a half-dollar. I am sure it eventually went to a George Washington, but I do not remember. Certainly, I was the recipient of room and board. I received lodging, food, and heat in the winter. We had heat in the summer, too, for most of my formative years. Air conditioning was not a part of the budgetary affordability. We had fans. And not the Chicago Cubs kind, but the ones that were electric and the manual ones you would receive from churches and funeral homes. There are still funeral homes that give them away. One of my early and vivid memories involves going into the home of a childhood friend in the heat of summer. No doors open to the outside and very cool inside. “How could that be?” was my question. I asked him how it was cool in his house and he pointed to the floor. Placing my hand over the register I felt cold air. Only heat came out of ours. How could that be? Cold air coming from the heat register. I was totally baffled. I did not ask him how it was possible. I was very puzzled and wished we had a furnace like that. It would have made life, especially sleeping, a whole lot more bearable.

I digressed. Back to taking about working for my parents. I do not remember especially liking my duties. They were called chores. They were called character-builders. And, they did foster character-development and a whole host of other benefits. I was told they would be by both of my parents. I did not much believe them at the time. But, I do now. I appreciate the opportunities I was afforded to learn the values I learned and to develop the character I developed. Yes, I did my chores because I had to, at least initially. I never thought of going on strike. If that thought had every entered my mind, it was dashed when my younger brother decided to exercise that option. I remember the situation well. I was in charge of cooking ‘supper’ at least one night per week. My brother was in charge of washing dishes. Dishes were done the old-fashioned way: by hand. I should confess that I may have used more dishes in the preparation of the meals than would have been necessary. My devious nature was not always under control. So, one evening, my younger brother decided he was over-worked and under-compensated. He made a sign and taped it to the door so our mother would see it when she arrived home from work: “On strike. No more dishes.”

“On strike. No more dishes.” I knew, intuitively, that his decision was not a good one. I do not remember if I offered any opinion or advice. I think not. I knew he had not exercised sound judgement or wisdom. And, I was right. Mom came home. My brother had retreated to our bedroom after posting his sign and was not present in the kitchen when mom entered. I do not remember if she said anything at all. But, I remember an atmosphere of displeasure. She removed the sign. She moved through the kitchen, down the hall, and to the bedroom. I felt an element of pleasure in knowing my brother was soon to have a learning experience but was wise enough to say nothing. I listened attentively and heard nothing. It was a bit disappointing. No raised voices. No sounds of spanking. Puzzling in addition to disappointing. My brother came into the kitchen very soon thereafter to wash and dry the dishes. He was not crying. But, I sensed that he had learned a lesson. He never went on strike again. Mom carried power as did dad. She was the primary power for much of our elementary and part of our junior high years because dad worked second shift. We knew not to test mom or dad too far. It was unthinkable and yet I have no clue what the consequences might have been. It was known not to go there. Thankfully, we had parents whose words carried meaning and clout. This is long enough for now. More about working for and with my parents in later postings.